If You are a Bystander of Bullying

2. Being a Bystander of Bullying

Bystanders of bullying are a major part of the bullying problem because 66-85% of bullying takes place in front of bystanders. 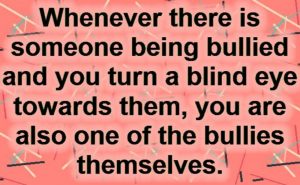 There are different types of bystanders of bullying – some active and some passive.  They all reinforce the bullying and are part of the problem.

Why Do Bystanders of Bullying Stand By?

There are a number of natural reasons that people choose to be bystanders vs. being upstanders (a person who intervenes in support of someone being bullied).  These reasons have much more power when a bystander feels that they would be acting alone if they intervened on behalf of someone targeted by bullies.

There are lots of possible reasons for being a bystander.  It’s critical to get past those reasons and act.

The Impact of Bullying on Bystanders

Bystanders who do not become upstanders can become victims of the bullying, even if they aren’t the target.  There are several experiences that they can have that can be not just uncomfortable, but damaging.

Increased Feelings of Fear and Anxiety

Teenagers who consistently witness bullying and do not find the courage to become upstanders can experience a surprising amount of fear and anxiety.  The background anxiety that is generated can be complemented by specific fears of becoming a target or losing relationships.  They can end up living with a sense of insecurity that can cause a surprising amount of psychological damage.

Fear and anxiety can also cause a level of stress that can cause bystanders to avoid or lose interest in school and other activities.

On the other hand, if bystanders can overcome their fear of intervening, they can replace those life-limiting emotions with a sense of empowerment.

Bystanders know that bullying is wrong and that they should do something to stop it.  When they fail to act on their values, they can experience a strong sense of guilt (doing something wrong) or shame (not being good enough).  Like fear and anxiety, guilt and shame can significantly impact a bystanders sense of self-esteem.  It can even lead to self -destructive behaviors (from mild to serious).

Failing to act when someone is being hurt by bullying can cause bystanders to pull back or dull their emotions.  In trying to avoid the feelings of fear and anxiety or guilt and shame, bystanders can also diminish their more life-enhancing emotions, such as excitement, confidence, pride, hope, and satisfaction.  Caring and empathy can be dulled to the point of beginning to blame the target.  The dulling can also cause boredom to outweigh interests.

Impact on the Three Core Challenges of Being a Teenager

The development of peer and romantic relationships can be undermined by a diminished ability to be empathy, a lack of confidence, increased anxiety and a lack of trust, etc.

The development of the competencies required for success as a young adult can be undermined by a lack of interest, a lessened willingness to engage, diminished self-confidence, or just a lack of energy.

Note.  If bystanders can become upstanders, none of these factors need get in their way of developing as successful young adults.

In the end we will not remember the words of our enemies, but the silence of our friends.

We Need Bystanders to Become Upstanders

If most bystanders want to do the right thing – and become upstanders – the questions is, “How do we help bystanders do what they would really value doing?”  In the case of teen bystanders, there is no single recipe for success.  But there are steps that adults and other teenagers can take to support bystanders in taking the often tough steps to become an upstander.

Upstanders are the single most powerful force in preventing and countering bullying.  There are actions that people can take to increase the number of upstanders.

As a teenager, you can choose to be a bystander or an upstander.  And you can prepare yourself to be an effective upstander as well as enlist others, so that you are not standing alone.

As a target you can ask people to be upstanders and support and protect you.  And you can give them ideas about how to do that (see the section on being an upstander).

As an educator or community leader you can work to create a culture in your school community or community organization that supports upstanders, works effectively with targets, and challenges bullies.  And you can role model being an upstander.

Courage is the commitment to begin without any guarantee of success.