More on Heroic Test #3
Being Between Endings and Beginnings – “Inbetweenity”

During the teenage years, this experience of “inbetweenity” is a lurking companion.  Sometimes it is a strong feeling and sometimes it is just there in the background.  With all the change going on in the corporate world, this is also a frequent experience of adults.  It just comes with the territory.

In the midst of the journey you can expect to get pulled in different directions and often feel like you’re rafting in whitewater, on an emotional rollercoaster or in a crazed game of bumper cars.  You will feel connected and at times disconnected.  You will sometimes feel confident and sometimes insecure.  Your world will at times seem to come together and at other times seem to fall apart.  Sometimes you will be ready to engage and other times want to withdraw.

The concept of dynamic tensions simply means that you will be pulled different directions and there won’t be a complete resolution.  For example, one characteristic of “inbetweenity” is the dynamic tension between feeling connected and feeling disconnected.

This is the world of “inbetweenity.” Part of the challenge is there are a bunch of these dynamic tensions at work at the same time.  Welcome to the journey. 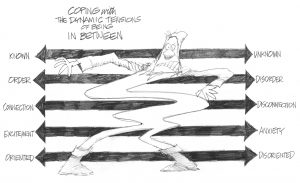 Examples of Dynamic Tensions That Are Normally Experienced

Order vs. Disorder
The tension between order and disorder is part of the journey, part of change, part of the normal life process.  It is also very uncomfortable.  It can also feel like the tension between feeling oriented and disoriented.  It’s always a challenge to make sense out of things when so much of your world is changing.

Place vs. Displacement
“I have a place” is a profoundly important statement or belief.

Not having a place – a place to be, a place to feel known or valued, leaves a person without reference, without a sense of belonging.  And yet, that is exactly what must be experienced to some degree in cases of major change, in heroic journeys.  Again it’s a question of degree and that will vary.  Sometimes you will feel strongly that you have a place.  Sometimes you will wonder and sometimes you might feel displaced.

The connection may be to other people or groups, to a geographic place, to ideas and values, to ways of doing things, etc.

Courage vs. Lack Of Courage
Courage comes from Latin and French roots, meaning “heart”. It is engaging in spite of fear, anxiety, doubt, or despair not their absence.  It is in contrast to withdrawing or refusing to engage.

Heroes, however, do not leave known worlds, travel the “trail of tests”, and reach completion without at times losing their courage.  It just isn’t human.  This is one of the reasons why heroes do not go alone.  Sometimes courage is recovered without help, but often it is the intervention or support or belief of others that enables an individual to rediscover his or her courage.  At other times it is a matter of acting courageously even when the feelings of courage aren’t present.

Hope/Belief vs. Doubt/Despair
Much of the time in periods of major change hope and belief exist together with doubt and despair.

The definitions of “doubt” are familiar to any who have experienced significant transitions or lived heroically;  “a condition of uncertainty”, “lack of conviction”, “to waver or fluctuate in opinion or belief”, “to be inclined to lack of belief.”  Despair is even more troubling as it is simply a lack of hope.

In contrast “hope” is defined as “to wish for something with expectation of its fulfillment”, “to have confidence, trust”, “to look forward to with confidence or expectation.”

There will be times for almost everyone on the journey when doubt and despair seem to be winning.  The key then is to remember that this is a dynamic tension and it will inevitably swing back the other way – particularly if you have some helpers, healers, mentors or companions to help it along.

Excitement and anticipation also tend to encourage contact and engagement while fear and anxiety reinforce the desire to withdraw or disengage.  Sometimes fear and anxiety motivate engagement, but not usually with the intent of ongoing contact, more in the nature of an attack.

Although often used interchangeably, it is helpful to differentiate between fear and anxiety to help in managing them.  Fear can be seen as having a more defined source or object (“I’m afraid of…”).  The source(s) of anxiety is less specific and often hard to describe.  It is more generalized and, therefore very often more difficult to manage.

The moment in between what you once were and who you are now becoming, is where the dance of life really takes place.

“Courage is more exhilarating than fear and in the long run it is easier. We do not have to become heroes over-night. Just a step at a time, meeting each thing that comes up, seeing it is not as dreadful as it appeared, discovering we have the strength to stare it down.”

Both of those extreme experiences can happen, but it’s usually a mix of those feelings and the mix can change frequently.  The changeable mix is normal.  It’s normal in all cases of significant change, so you will experience this “inbetweenity” as an adult as well as a teenager.  It’s just part of the journey.  Knowing that can make it easier to tolerate it as well as manage it. 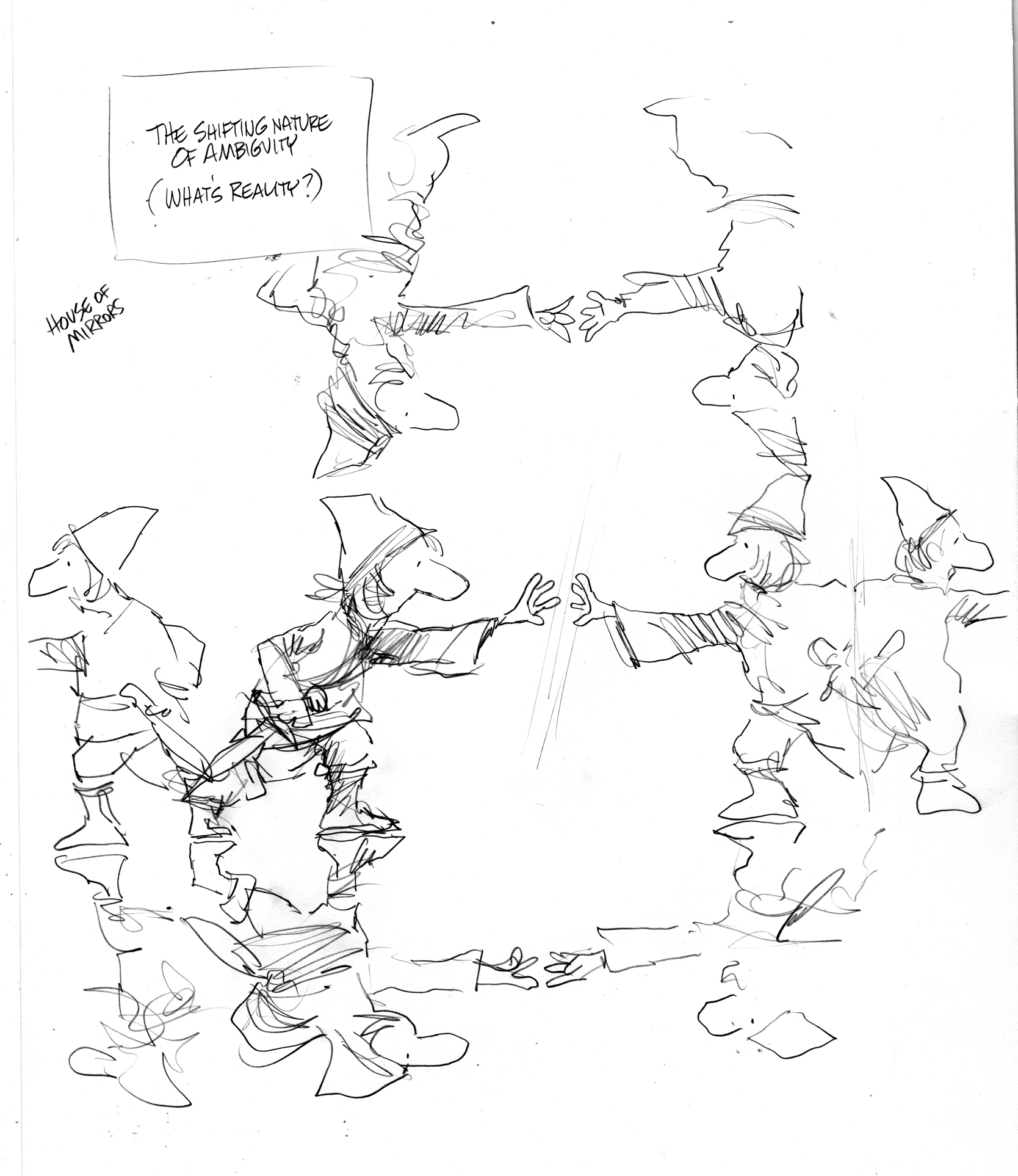